Home » Fishing » Spinner sharks, stingrays and a visit from a tiger

Spinner sharks, stingrays and a visit from a tiger

While at anchor, we like to put a few lines out to see what’s biting. Zzzzzzzz, Bodin pulls in a baby spinner shark about 12-inches long. The boys are very excited. They’re knowledgeable now and have become avid fishermen since moving aboard. 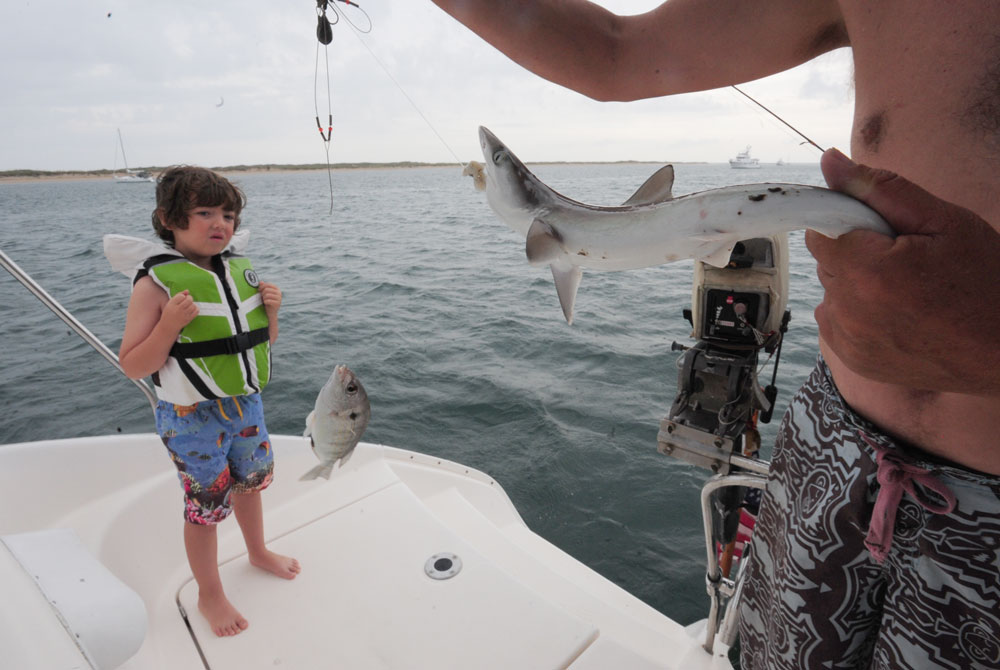 During our stay in Cape Lookout —which is a fisherman’s

paradise—they reel in sharks, croaker, sea trout, spot, a stingray, pin fish, blue fish and something called a scad. With Phill’s help, the boys also learn to throw the cast net. In the shallows, they’re able to collect as much bait as they need. They like to identify all their catch in: Sport Fish of the Atlantic, by Vic Dunaway.

We get a visit from our friends Andrew, Jay and Lauren on their fishing boat called Fly’in Fish. They tie up to the side of Izula. We’re the mother ship, or their “flotel” for a few nights while they fly fish for sharks off the coast.

After attaching one of their leftover chum bags to our stern, the boys are in fish-catching heaven just off the back of the boat. A huge stingray takes one line. A large spinner shark picks up another and puts up a huge fight. There’s lots of action at the back of the boat tonight.

Next morning just before breakfast, Phill rigs up a live bait bluefish on a line hoping to catch a cobia or a kingfish — both are delicious. The rod takes off. Andrew starts to reel it in. He says it’s easy. And as it gets closer, they see a small fin and think it’s another spinner shark. The fish comes right toward the back of the boat. But this is no spinner shark, it’s an 8-foot tiger shark with most of his fin submerged! When he sees the boat and the fishermen, he takes off like a rocket in the other direction, strips the line and then snaps the 25 lb leader. What an exciting encounter with this creature from the deep!