Home » Uncategorized » An Atoll in the Atlantic—Hogsty Reef

An Atoll in the Atlantic—Hogsty Reef

The stars are so amazing at sea. I did a night watch and sat at the helm for about 3 hours. I looked at the twinkling bioluminescence in the water. There was no moon, so everything was really bright, and the water was dotted with light. It was like we were sailing through the Milky Way.

After a few days sailing from Samana, DR across the ocean, we arrive at a remote and uninhabited coral atoll in the southern Bahamas called Hogsty Reef. This 5×3 mile coral atoll rises up from 6,000 ft deep surrounding waters. It’s located in the out islands half way between Great Inagua and Acklins Island. 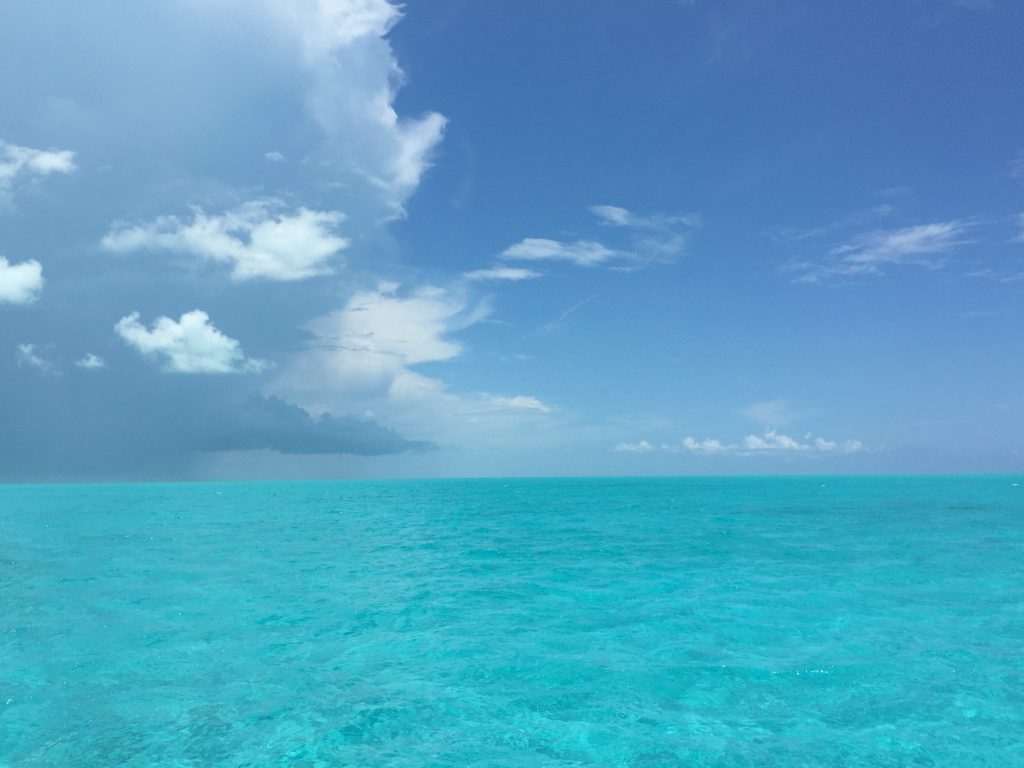 On our approach to the atoll, we could see two of the shipwrecks from a few miles out. They appear to be ships on our path. We wonder if they’re moving? But as we get closer, we see that these massive rusty steel ships are snared by dragon’s teeth below the surface. Their rusty hulls have been stuck high and dry on the outer reef of the atoll for many years.

The first thing we notice as we came into the shallows near the lagoon entrance is the color of the water—it’s electric Gatorade blue. We didn’t see this water color anywhere else in the Caribbean all the way down to Grenada.

There are two tiny islands that are more like sandbars at the mouth of the lagoon. We anchor behind one of them called Northwest Cay. It’s mostly sandy, but it’s also home to thousands of loud and squawking nesting sea terns. The Cay is covered in bird eggs just plopped down on the sand—no nests, no nothing. There are also ruins of an old lighthouse which looks more like a big chimney made of stone with a little hole in it filled with bird bones. 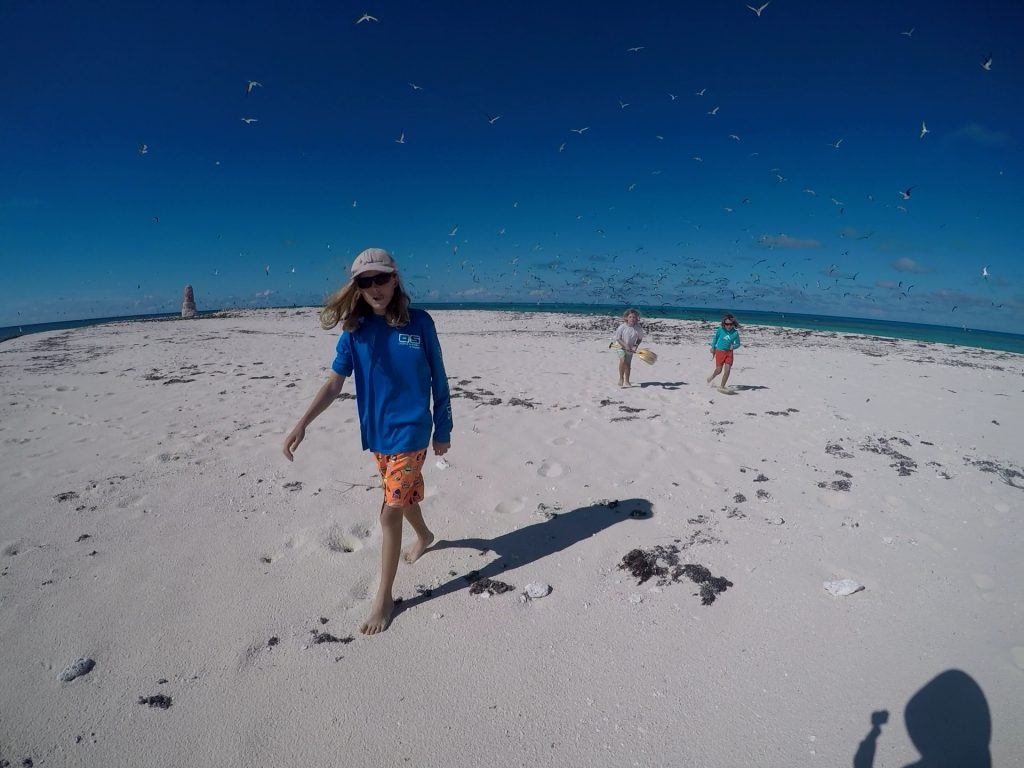 According to what we read about this atoll, hardly anyone ever visits this unique little paradise. This atoll is a bit of an oddity out in the Atlantic. Most atolls are in the Pacific. While we’re here, we see two other sailboats and one big fishing boat blasting past. The pretty classic little sailboat anchored next to us is returning to Florida after being featured in the new James Bond filmed in Jamaica…”ramble on” or something like that.

The entrance to The Hogsty Reef lagoon is shallow. There are coral heads all over the lagoon, but the visibility is clear. We catch a ride inside on our friends’ boat for the afternoon for lunch and a snorkel.

We anchor near the wreck of the old 134-foot Liberty Ship that was built in Wilmington, NC and used in WWII as a cargo ship. It was originally called the SS Richmond P. Hobson, but when it wrecked up on the reef in July 1963, it was called the Trebišnjica. 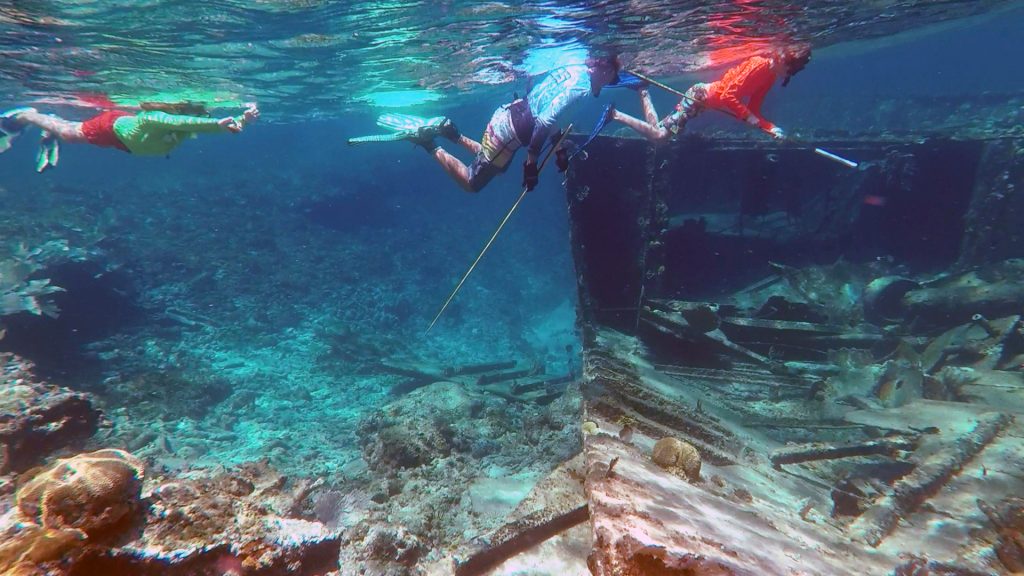 At first sight, the big rusty wreck is half underwater and broken apart. The hull is caving in and metal prongs are sticking out everywhere. Birds sit on them like branches. We dive into the very shallow water and explore the shipwreck from underneath. We see a few familiar things like a huge windlass, a toilet, an old flask, big nuts and bolts, and lots of big broken boat parts. Two barracuda flash past and lots of reef fish like snapper and wolf fish are schooling. Dad sees a shark. We swim around the backside of the wreck and see lots of purple fans but not much reef. Apparently the rust does something bad to the reef. It’s interesting to swim through the skeleton of an old boat and think about what it was like and how this all happened. 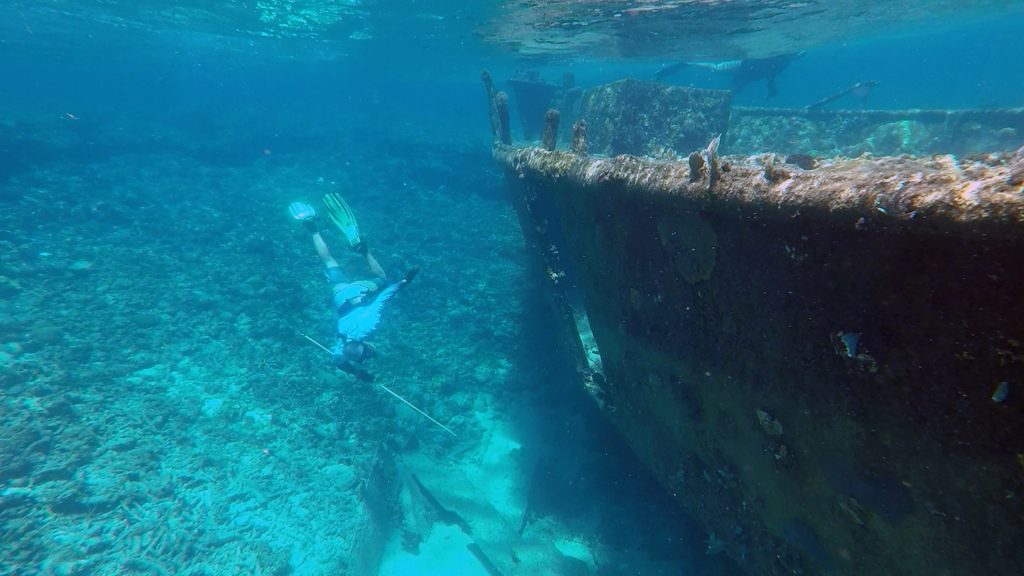 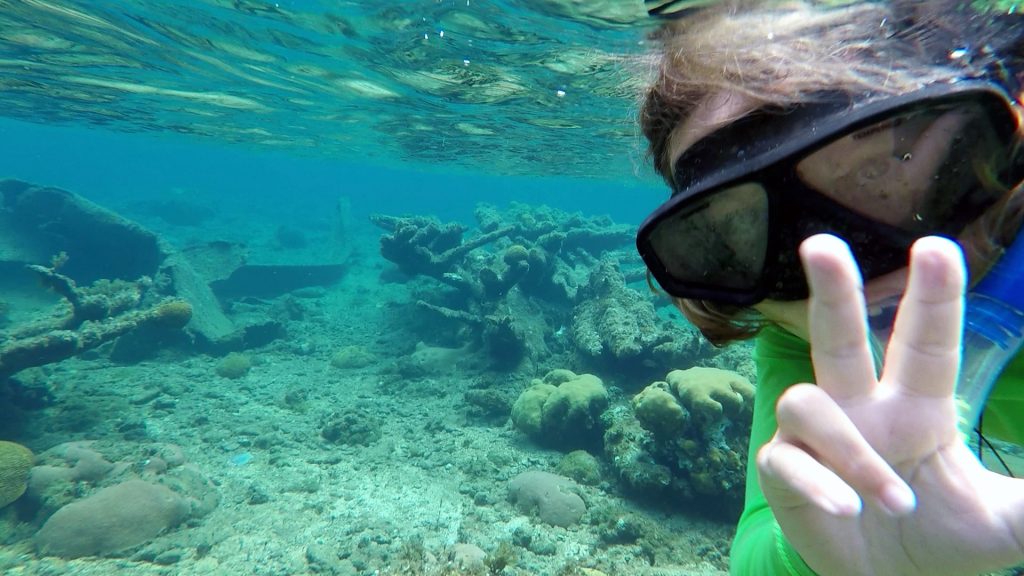 Hanging in the Great Guana Cave