Home » sailing » An overnight sail—a first for the kids

An overnight sail—a first for the kids

This time of year, it’s a challenge to sail southward along the US East Coast. It takes patience. The prevailing summer wind is SW—which is exactly the direction we want to go. Most boats are headed north toward the Chesapeake Bay, Block Island or Maine. But we’re leisurely making our way south and spending time in some of the charming port towns and beautiful barrier islands along the way. 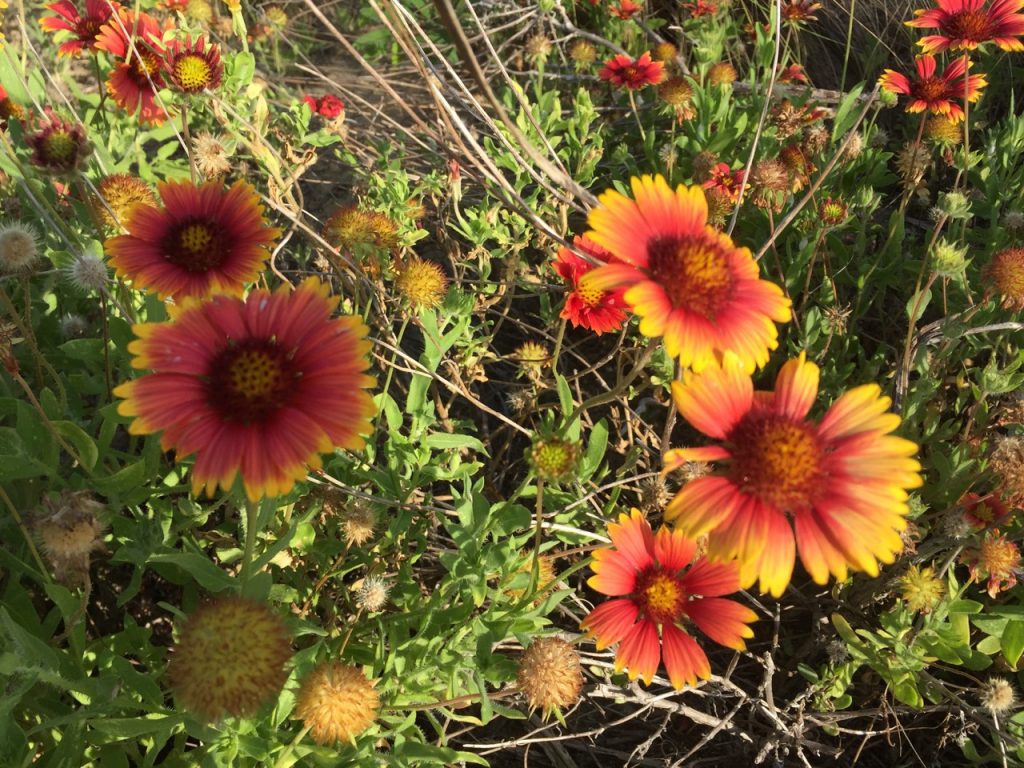 These Gaillardia flowers on the barrier islands of North Carolina grow in the soft sand.

Without a schedule, we can wait until the timing is right to make our moves. We check a variety of sources online and listen to forecaster Chris Parker on the single side band each morning to monitor weather conditions. For the kids’ first overnight passage, we wait for a calm, sailable opportunity. With an east wind forecasted, we leave tonight. Our friend Walter joins us for an evening sail down the coast to Southport, NC. Depending on the weather and boat, we think we’ll be in port tomorrow afternoon sometime.

We leave the Beaufort, NC channel at about 8:30 p.m. with 10 knots of breeze out of the east. It’s a comfortable point of sail for most of us. Bodin feels a bit queasy and takes a Dramamine. And Jock the dog can’t seem to settle in. With main and jib up, we make about 6-7 knots for the first several hours. Our heading is 240-degrees. Seas are mild with a gentle 2-foot swell.

Our hope is to get to Frying Pan Shoals, which is about 30 nautical miles offshore, at sunrise-ish for an optimal fishing time. It’s still early and we have a few hours to go before then, but the anglers are already talking and excitedly thinking about what they’d like to catch. Tristan has a King Mackerel in mind. 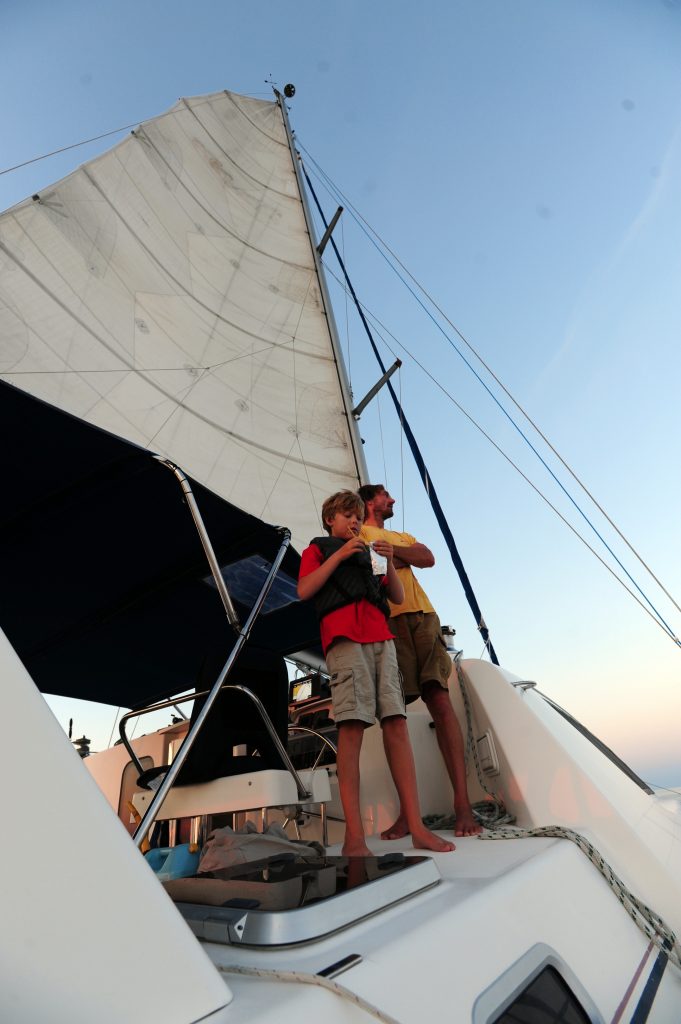 It’s been two days since the beautiful full moon, but we’re treated to a big full red moonrise over the Atlantic and it’s magical. Amazing that the boys get to see this spectacular site on their very first overnight passage. Phill takes the first watch and then the second. I think he loses track of time as he prepares lures for the morning. Walter takes the helm sometime in the wee hours. And everyone is up with the first light.

The sunrise sparks over the water and rises in a cloudless blue sky. Bodin is more comfortable today but can’t resist forty winks — it’s a bit early for him. Flying fish are everywhere. Skimming through the air in every direction, I’ve never seen so many. The color of the water is a deep velvet blue out here and it’s so crystal clear. 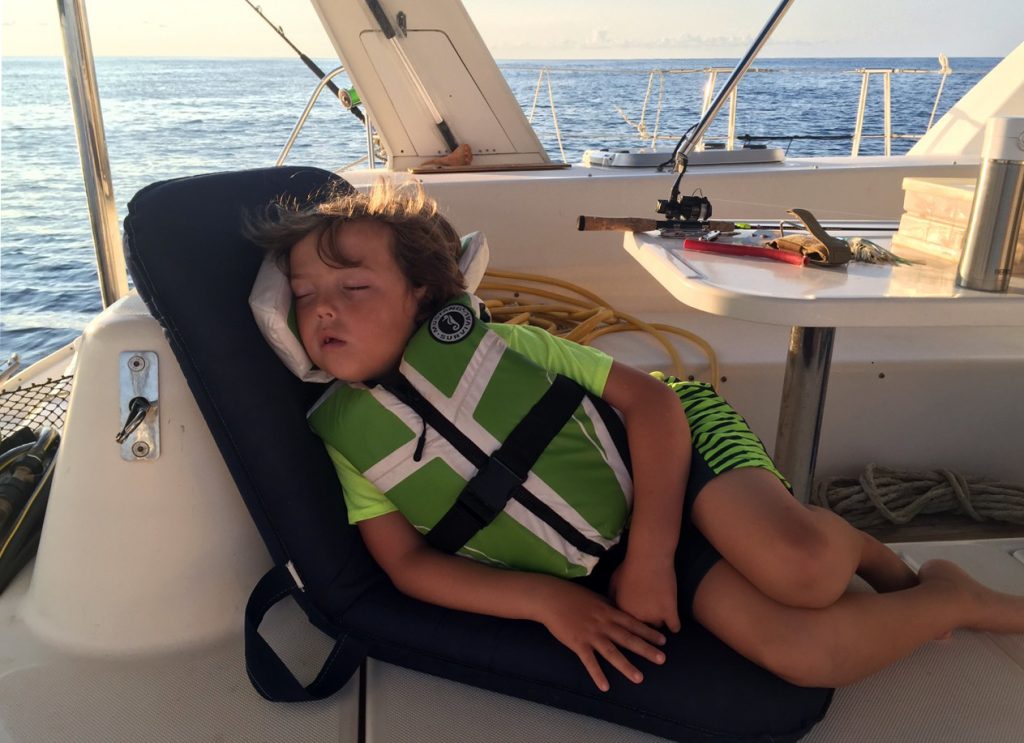 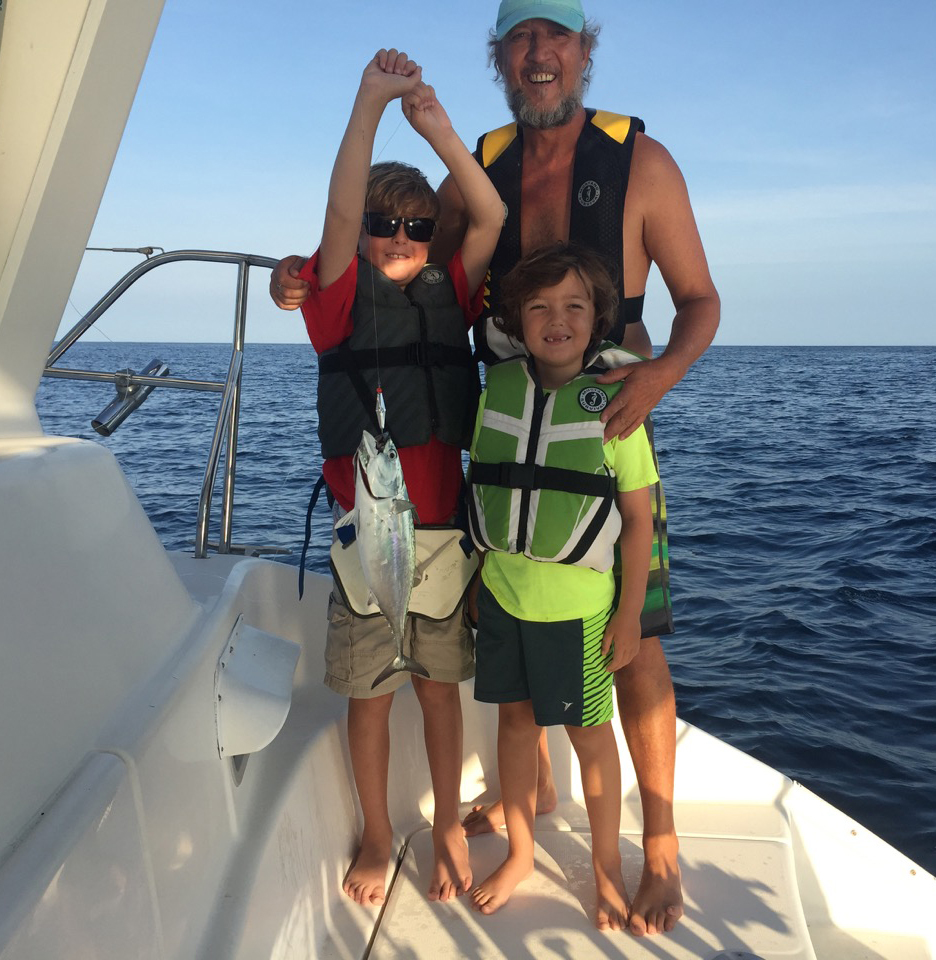 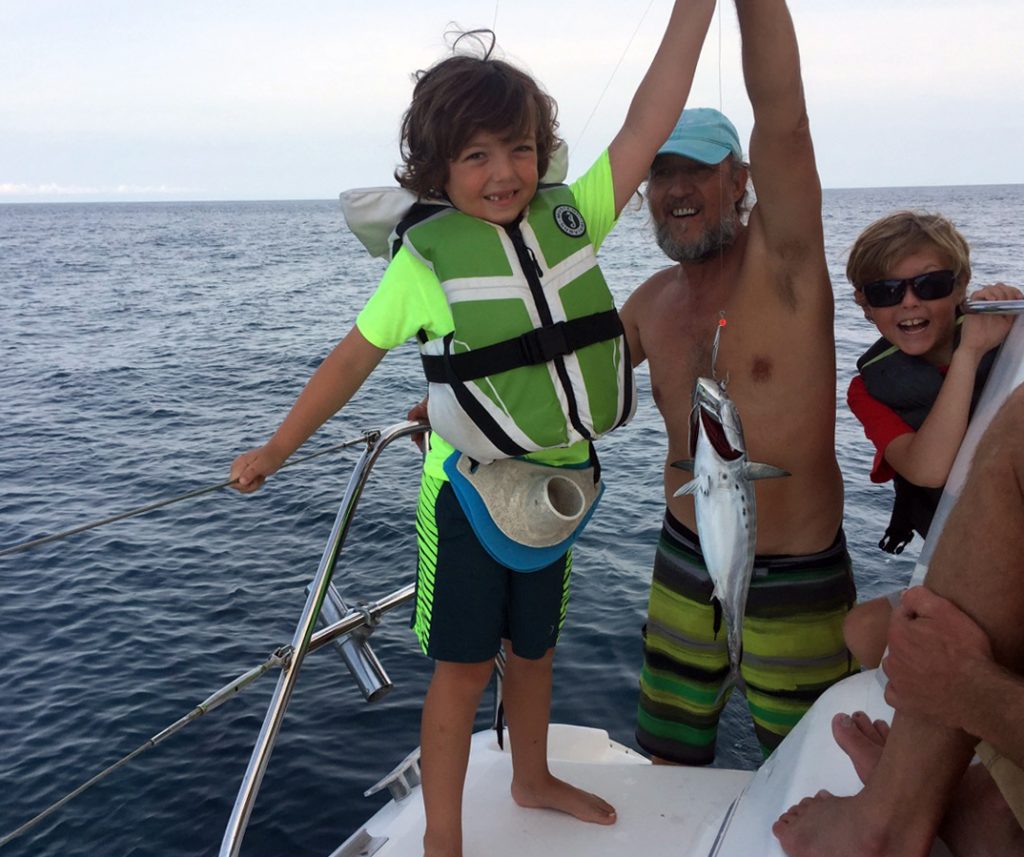 The Clark lures do well, but the fishermen decide to change it up a bit. Tristan chooses the Australian Runner — which is orange with tiger stripes. And at 11:00 a.m., something big hits it. Very exciting as the fish takes the line. There are splashes and silver flashes. We can’t make out what kind of fish it is yet. Phill reels and brings it up next to the boat. It’s a King Mackerel—just what our T was hoping for. With Walter’s help, they land it on the back of the boat. The mackerel is about 40 ½-inches long and without a scale, we think about 28 pounds. Phill cleans and puts our catch on ice in no time. That’s dinner tonight. 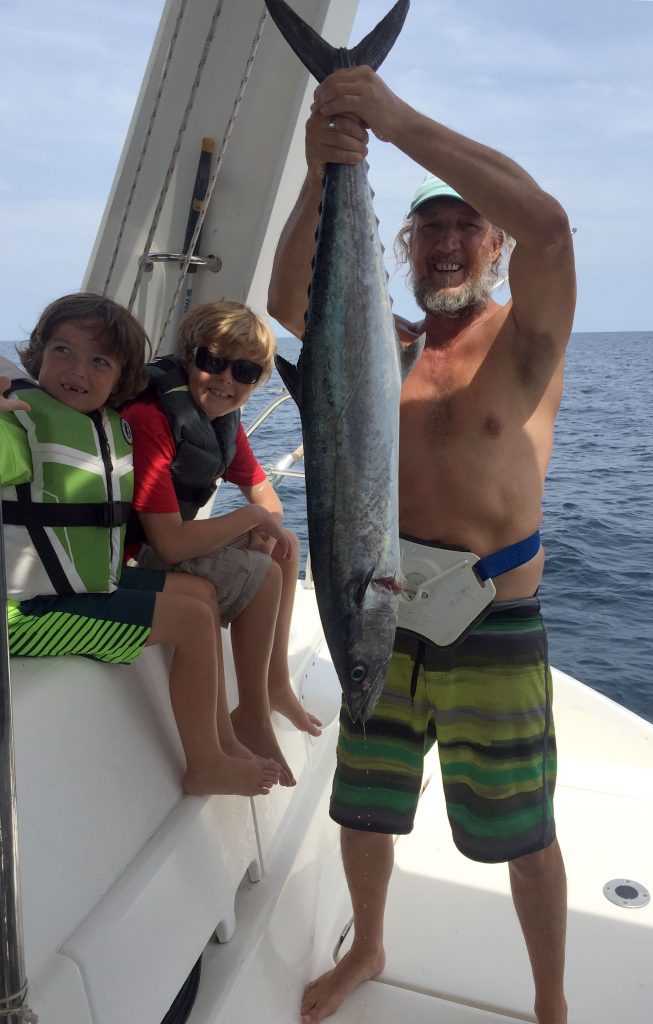 At our waypoint, we make our turn. We’re just past the shoal marker. To port, we see the Frying Pan Shoals Hotel. This former Coast Guard installation is now an ocean-going bed-and-breakfast about 25 miles offshore of Southport, NC. There’s an article in Time Magazine called: “Light Sleepers — A new breed of B&Bs offers beacon and eggs.” The cost is apparently $300 per person for two nights and guests are responsible for their transportation to the tower. They say it’s popular with fishermen and divers.

After a few hours with a heading of 348-degrees, we enter the Cape Fear River. It’s about 5:30 p.m. Bald Head Island is to starboard and Caswell Beach and the Oak Island Lighthouse are to port. The water goes from blue to greeny-brown as the river runs out to the ocean here. We reach the Deep Point Marina at about 6:15 making this exciting passage about 22 hours. 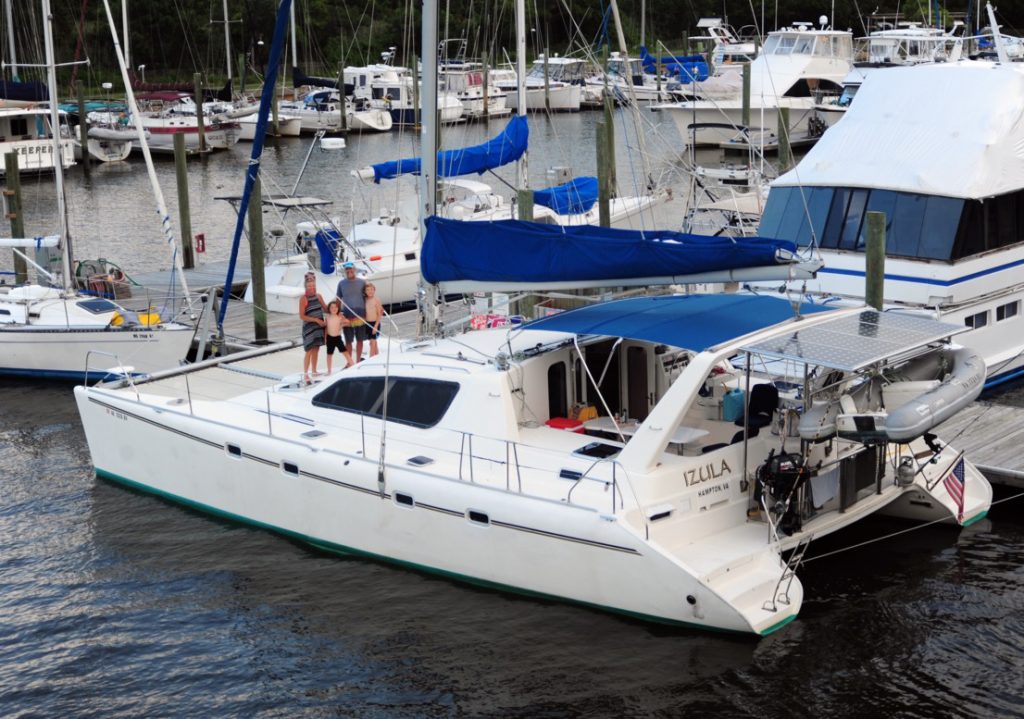 A visit to the Dolphin Research Center