Home » Uncategorized » Sailing the Graveyard of the Atlantic on Halloween

Sailing the Graveyard of the Atlantic on Halloween

Leaving Southport on Halloween seemed a bit eerie to me. More than 5,000 ships have sunk along the coastal waters of North Carolina since record keeping began in 1526. That first recorded shipwreck was just off the mouth of Cape Fear River— the very river we would use to get out to sea. Would we see ghost ships tonight? 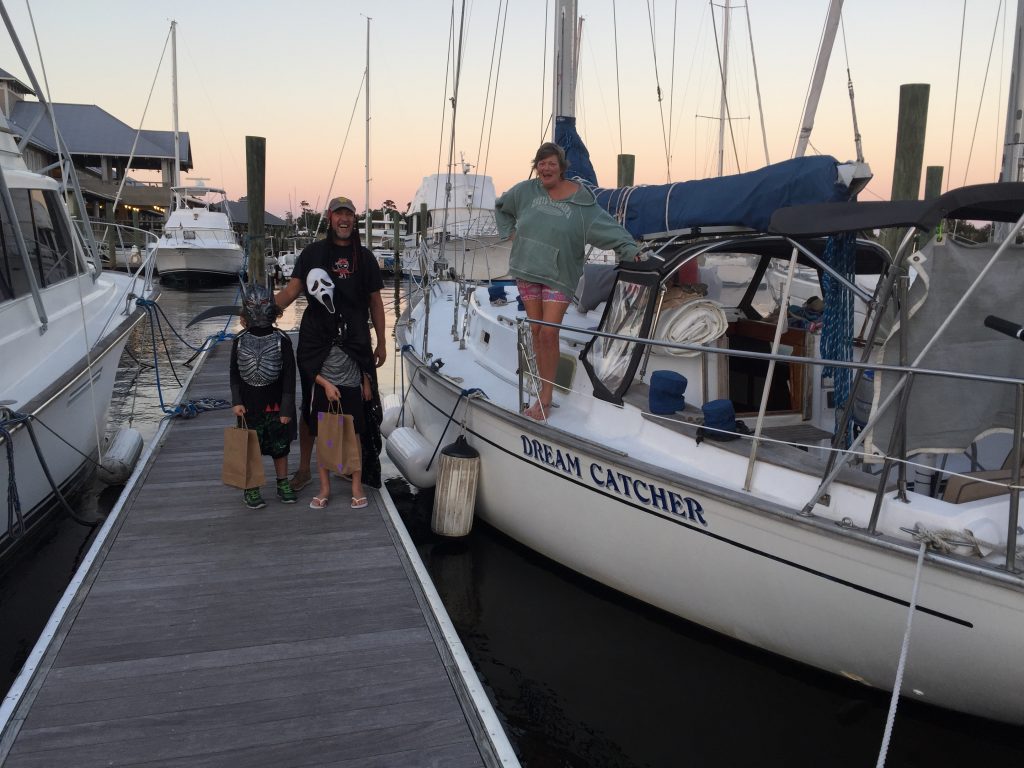 Before leaving, we organized pre-Halloween festivities at the marina. Fellow cruisers and liveaboards were flexible and happy to receive our trick or treaters a day early. Dressed as the scream and a dark crusader, the kiddos went boat to boat collecting sweet booty. They treated about 5 lbs of candy and even got a few gold pirate coins. Mom and dad even got a few bottles of wine, thanks Nancy from mv Happy Hour! 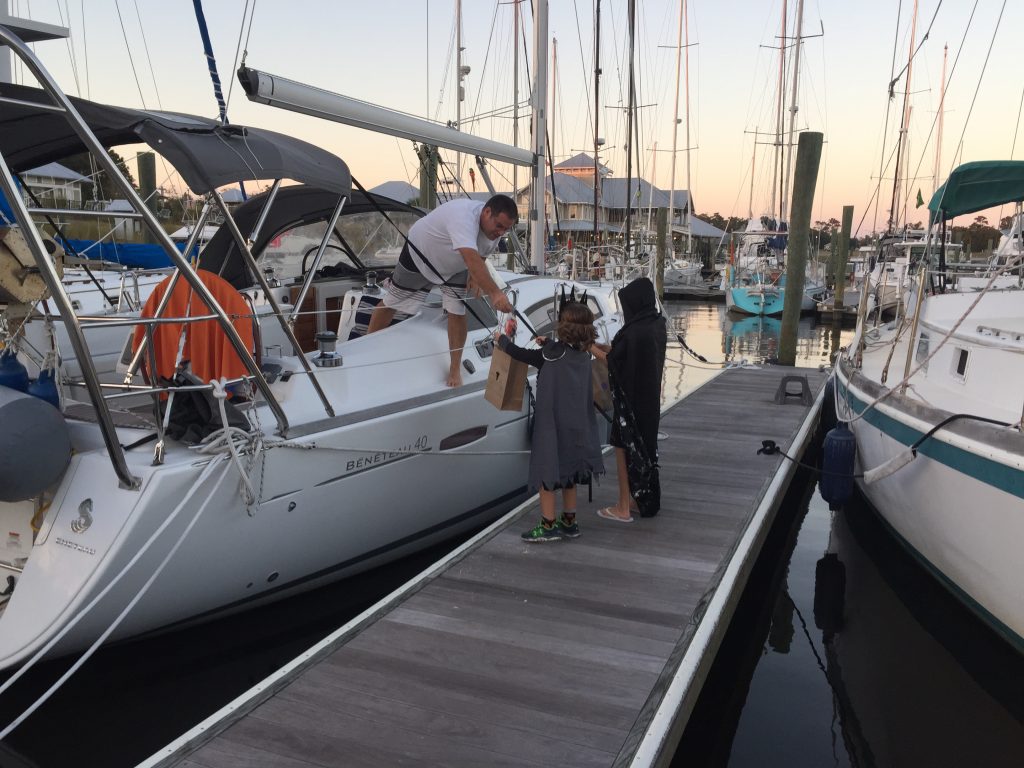 In the morning, just as we were making last minute preparations to head out, our friend Captain Evan came over. He brought more candy. “For the road,” he said. “Kids, this is pure sugar. You’ve got to eat these once you’re at sea.” (Thanks for the giant pixie sticks!)

We left the dock at 10:15 a.m. on Monday with the outgoing tide. I always like to sail with a big bright moon, but tonight it’ll be dark. With 15-18 knots, we set sails. Both seas and wind were coming from behind. This motion made both boys turn green. But then the Dolphins came to make us happy with their acrobatics. They shot clear out of the water and rode the big surf at our bows for hours. 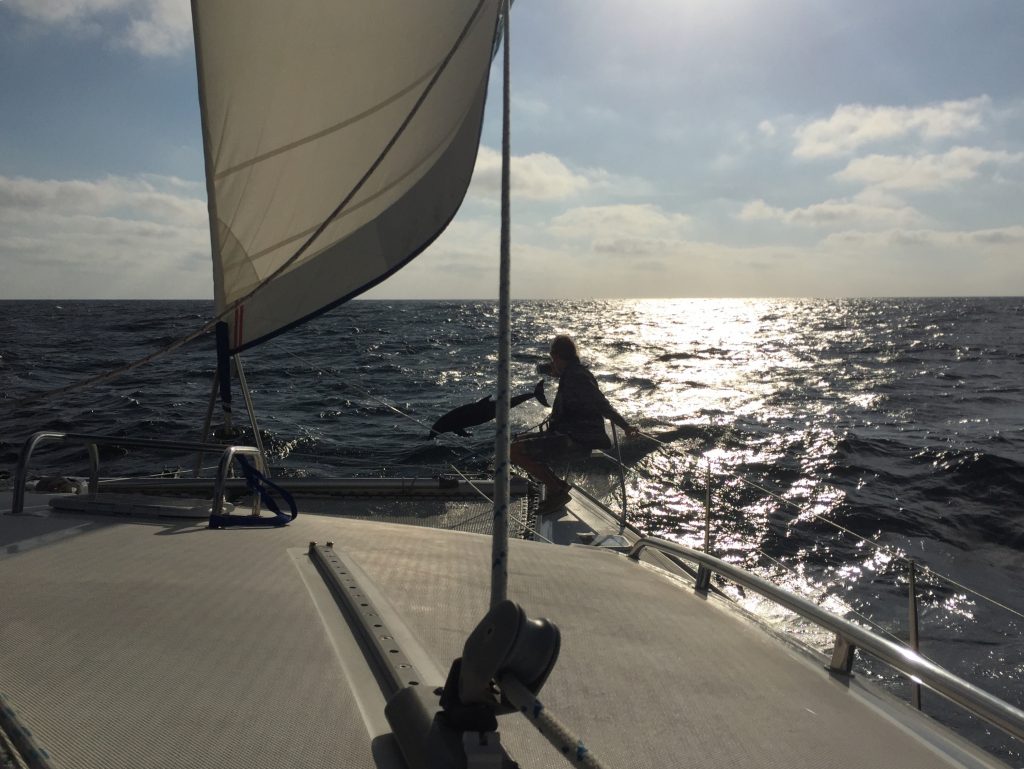 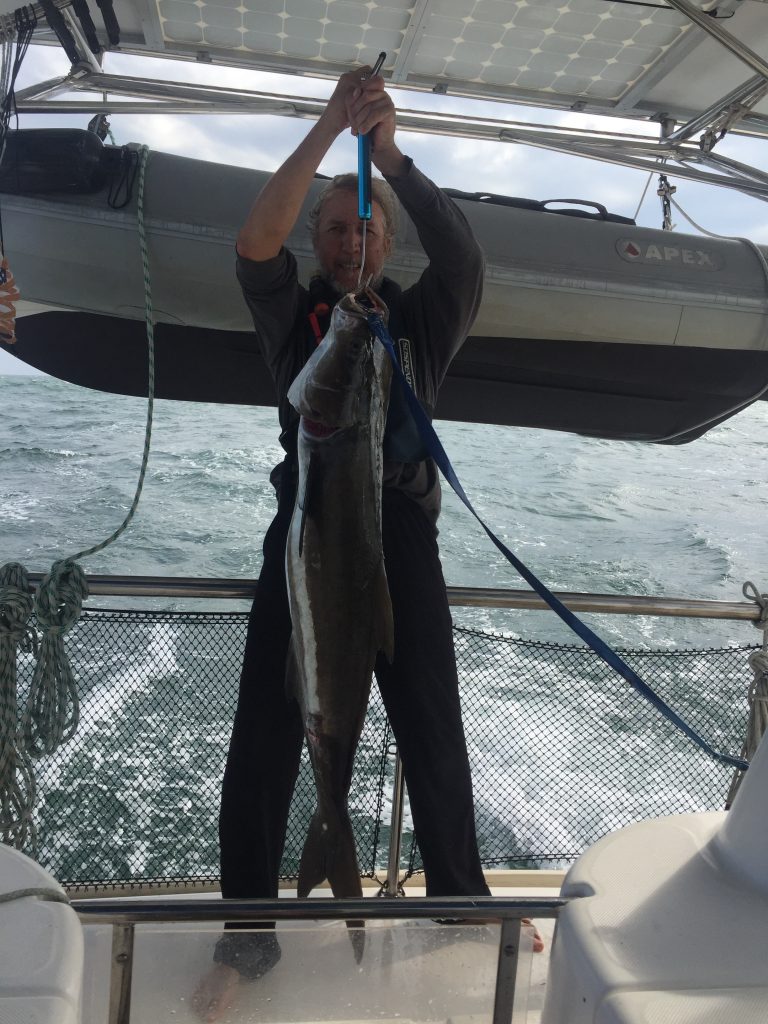 We were making such good time on our blustery downhill ride that we decided to slow it down to avoid big rolling seas coming into the St Augustine channel. Just as we changed course, Phill landed a 36-lb cobia (deliciousness). We pulled into Skull Creek anchorage at Hilton Head Island on Tuesday night—which turned out to be a peaceful and totally calm evening (aside from the post hurricane chainsaw noises) with loads of smaller dolphins swimming around us.

Wednesday morning, we headed back out to find calmer conditions. Wind was a bit lighter, sea state a lot calmer and we were reaching rather than rolling downwind. Much more comfortable. We sailed through the night with another catamaran, Sea Turtle. With channel marker mayhem from Hurricane Matthew ahead, we were happy to follow them in to St Augustine as they know the channel. Through the Bridge of Lions at 10:30 and anchored by 11 a.m. Thursday.