Home » Uncategorized » Licked by the Tongue of the Ocean

Licked by the Tongue of the Ocean

Wind from the north is predicted to be 25-30 knots, so our stay in Morgan’s Bluff is cut short. This anchorage is entirely open to the north and reportedly “untenable” when the wind blows from any northerly direction.

See you next time. We wave to our friends on sv Giro. This is such a sad part of the cruising life, but it’s also always so happy when we meet again. I think we might see them in Abacos for Regatta Time in June. We’re heading south for more bone fishing.

Phillip has been dreaming of fly-casting on the Andros flats and mangrove forests for big silvery bonefish for a while now. Bucket list. Fresh Creek directly south of us is our next port. We leave Morgan’s Bluff at around 12 to make our entrance to Fresh Creek at slack high tide around 5 pm.

But it’s rough out here and we’re getting a licking as we travel along the “tongue of the ocean”—the deep oceanic trench that plunges more than 6,000 feet and separates the islands of Andros and New Providence. Waves crash over the top and splash us in the cockpit. Things fly around.

We enter Fresh Creek to find the tide report is incorrect. Apparently locals say it’s about 2 hours later here. Entering an unknown channel in ripping current and moving at 8 knots will make anyone a tad nervous. But knowing where you’re supposed to be going helps. With a quick catamaran pivot around, we head back into current and wind to tie to the remaining pilings at what was once a famous yacht club—which is totally shredded now. 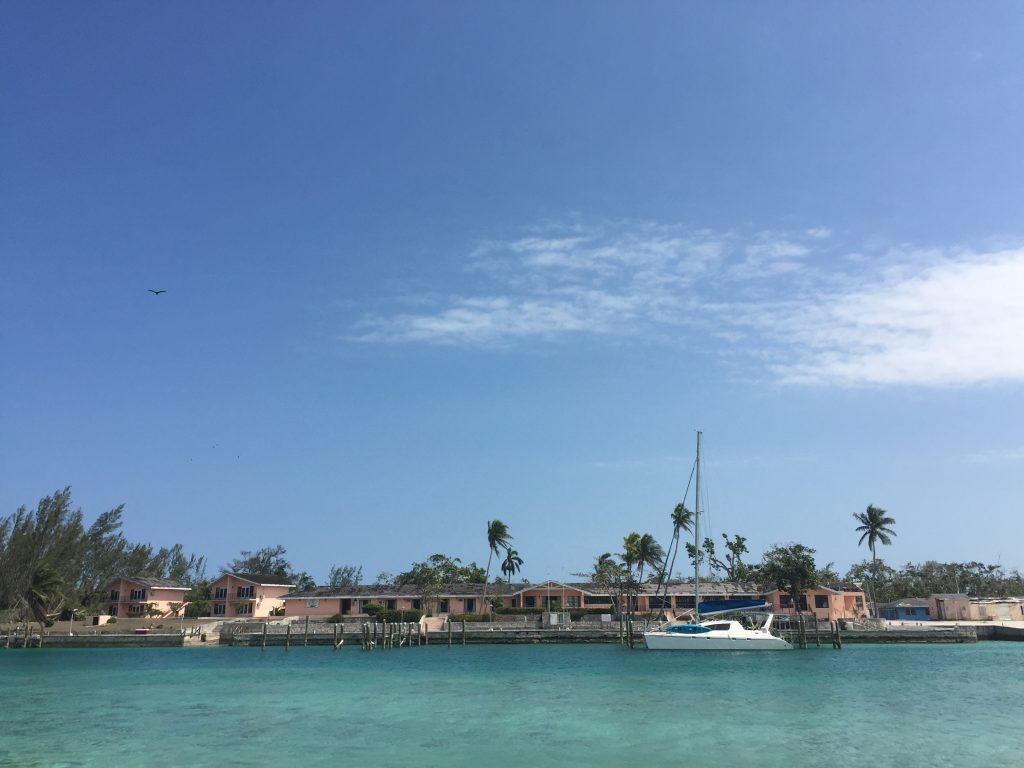 Phill called the local police department earlier today and got the cell number of the Mr. Stubbs, the GM of the resort —which is no longer functional: no power, no water, no phones— to arrange for us to tie up at what’s left of the Lighthouse Yacht Club and Marina.

Hurricane Matthew entered this creek at 160 miles-per hour last year and took the roof and lots of other things with it. There’s so much damage all over Andros. This is only one example of the devastation. But we happily tie up to the remnants of the dock “at our own risk” because anchoring in in Fresh Creek is tough combo of swift current and poor holding.

Phill explores the creek with fly rod the next morning to check out the flats. And later we all walk out to the shallows on the white sandy beach to cast a few lines and swim. Unfortunately, we don’t see many bonefish. A local man says the snapper will start coming in to the creek in a few weeks. But we don’t catch anything (edible or not) during our whole stay.

In the afternoon, we tour the Androsia Batik Factory where Lavern gives us an incredible tour. She explains the process and shows us how wax patterns are applied, cloth is dyed, and garments are made. 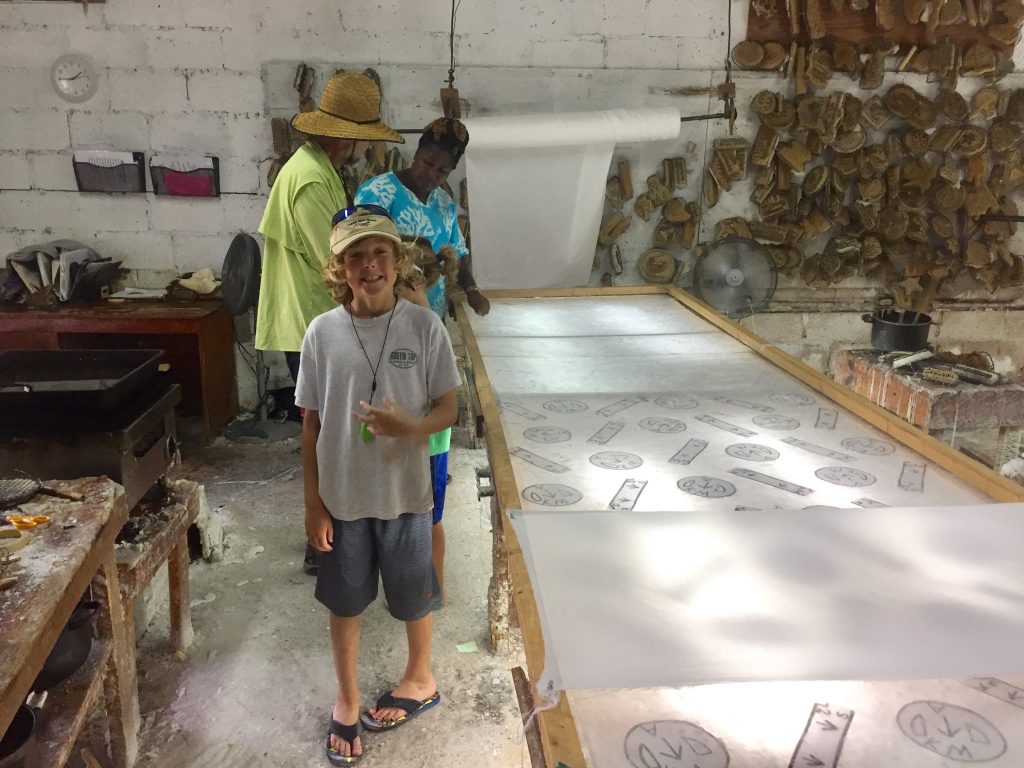 Later we tie the dingy at Hanks place and walk through Coakley Town. The mail boat came today so there’s fresh produce and bread at the shops. We buy a few items, though we’re still fully stocked up with provisions from Florida. I’m surprised to see prices on some things. Cereal is around $15 per box… but the kids buy ginger beer and Fanta out of the cooler for a $1 each. 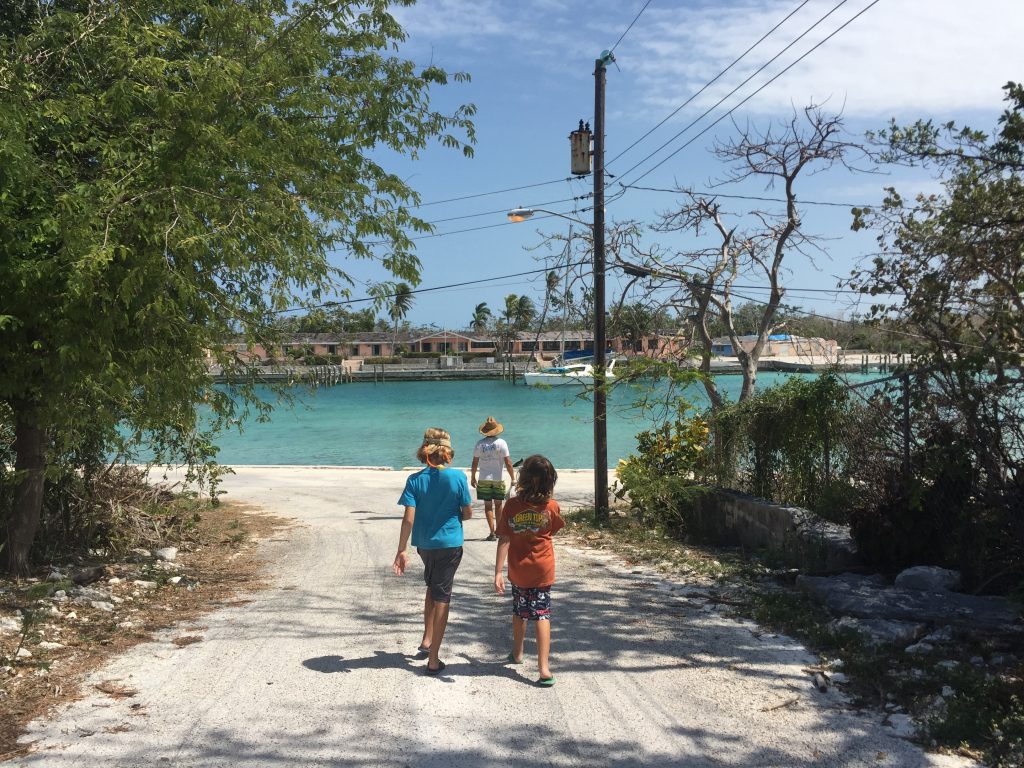